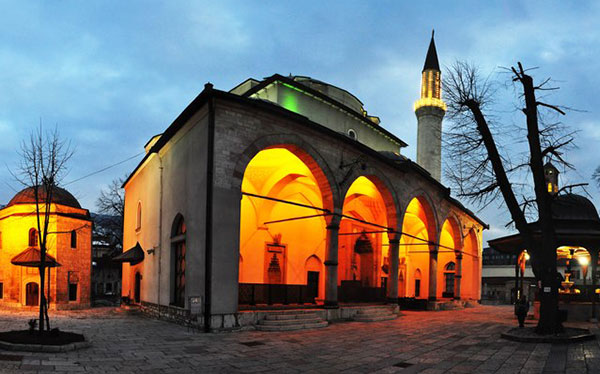 This grand and beautiful mosque represents one of the most magnificent works of architecture in Bosnia. Narrow streets of the old market, with dozens and hundreds of shops, surround the mosque, so that it’s quite impossible to capture its beauty and grandeur in entirety. However, when one enters its spacious courtyard, everything changes. Before one’s eyes appears an imposing edifice, filled with tranquillity, harmonious beauty and grandeur. This is not only the biggest mosque ever built in these parts, but also an architectural masterpiece of the Ottoman period. The builder of this mosque was the main architect (mimar) of the Ottoman Empire, Adžem Esir Ali, a Persian from Tabriz who was taken captive in the Turco-Persian War and who, all the way until his death in 1538, performed the duty of the main architect in Istanbul. Alongside Mimar Hajrudin senior, he was one of the leading creators of the so-called Early Istanbul School of Architecture, and this mosque is one of the most valuable accomplishments of this school outside Istanbul itself. 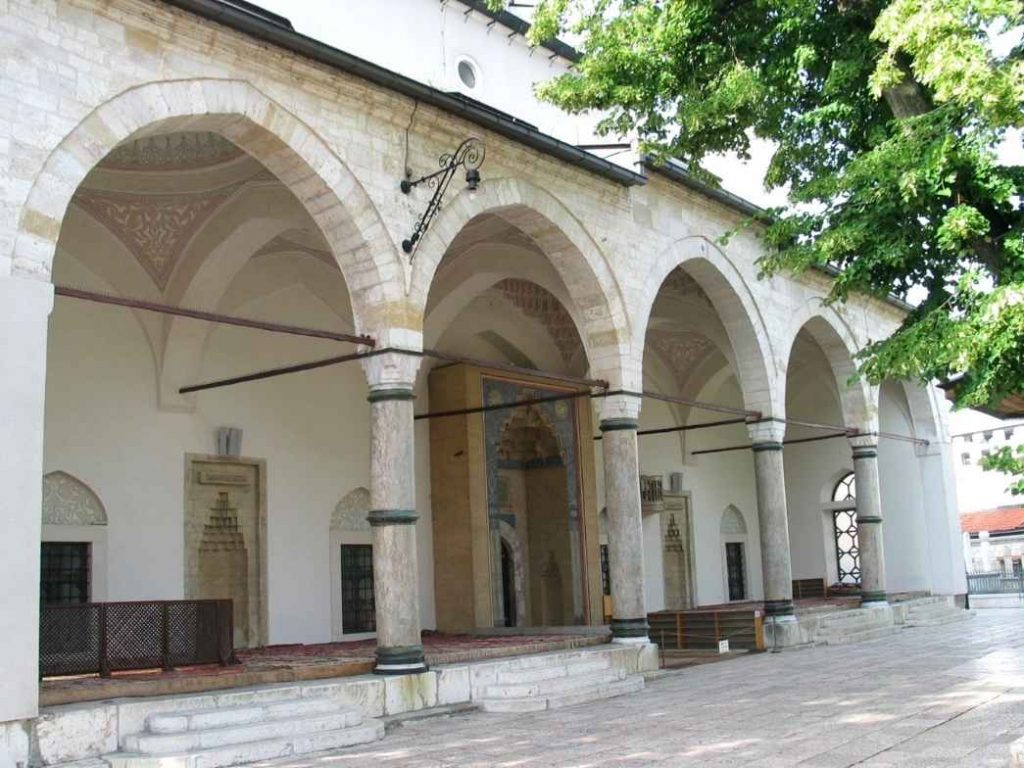 The Ghazi Husrev-beg’s Mosque, or as it is simply known among the people as the Beg’s Mosque, as far as its design, shape and dimensions are concerned, represents a work of special interest for the study of Ottoman architecture in our parts. The mosque has a complex architectural rendition.  The frontal part of the mosque is dominated by heavy marble pillars, which carry the arches of the mosque colonnade. These pillars separate the colonnade into five rectangular spaces of which every single one is vaulted by a dome.

The main entrance into the mosque is beautifully adorned with stylised arabesques, wall ornamentation, gilding and marble. 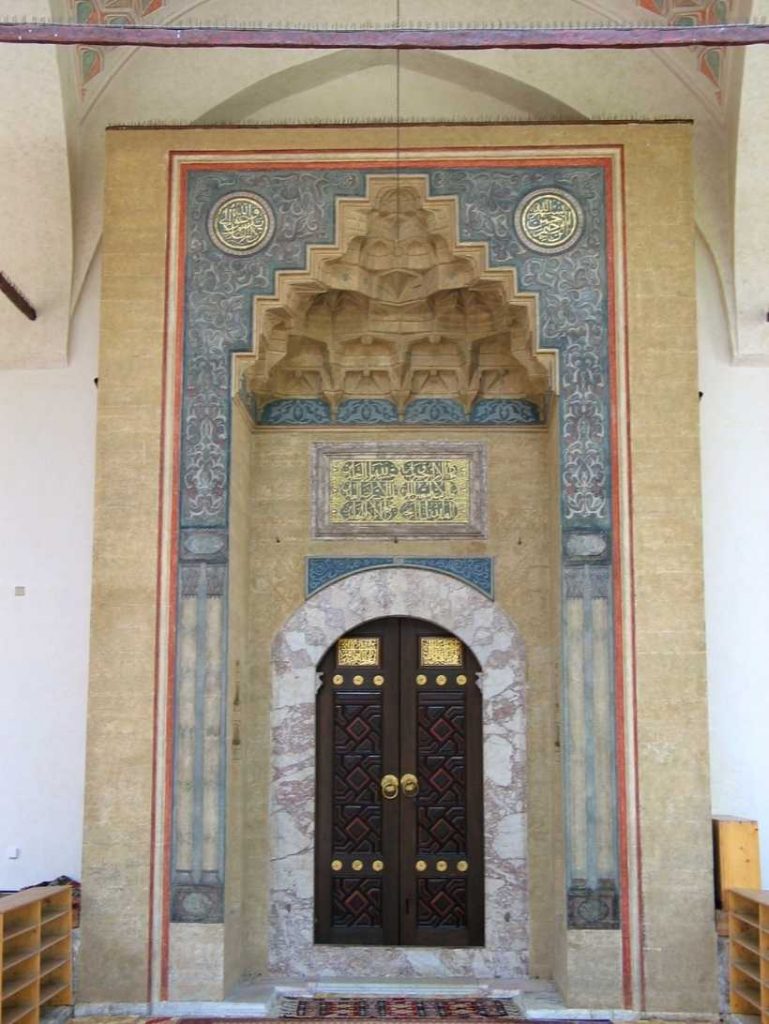 Above the main mosque entrance there is stone tablet, 120 cm X 60 cm in size, on which verses in Arabic language are carved. The inscription is placed into six elliptical spaces edged on its sides and through the middle with arabesques. The inscription text is partly vocalised. The inscription surface is blue and the letters are gold plated.

The translation of the transcription is as follows:

“The mosque of the good people Husrev-beg

He is the destroyer of foe, helper of the champions of faith,

Propagator of benefaction, helper of the pious.

God inspireth us with its verse:

(This is) the meeting place of benefactors, a home of those

If the numerical values of the Arabic letters in the last verse of the chronogram, written in beautiful calligraphy, are added, we get the year when the mosque was built. It is the year 938 according to Hijra, or 1530/31 A.D.

Once we enter the mosque the harmonious dimension of its space impresses us. Owing to the relation between its width and height, the builder of this mosque managed to achieve a strong impression of spatiality, which is enhanced by the carefully planned lighting. The central space of the mosque is a simple building structure, its width and length measuring 13 metres each, with its vertical profile reaching perfection. This central space is vaulted by a dome 26 metres in length, which means that the relation between the height and the base is 2 : 1. Below the dome is a spherical gallery with a wooden enclosure which, at one time, served for the purpose of lighting the countless number of the mosque lamps. The gallery can be reached by the stairs built into the massive stone wall whose thickness is two metres. 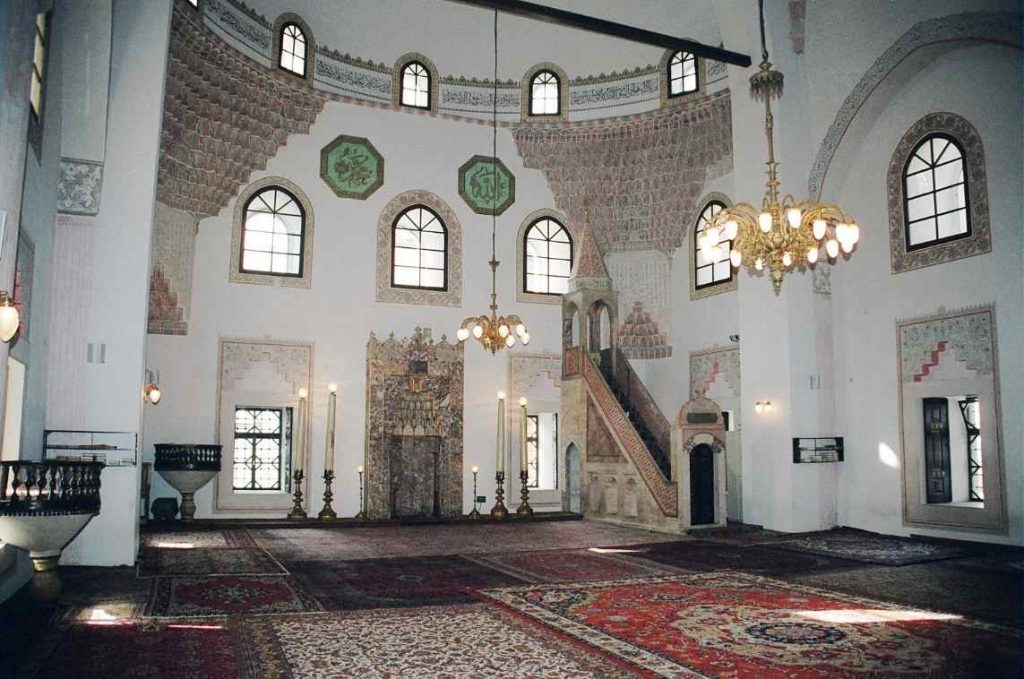 The central space extends towards the second dome of the same width and is vaulted by a dome 16 metres in height. This space is covered by a half-dome.

At the front of the mosque, exactly in the middle of the front wall, within a red marble surface, there is a beautifully decorated mihrab (a place where the imam – a Muslim priest stands while leading prayer). The mihrab faces south-east, or towards Kaaba (the most sacred Muslim pilgrim shrine in Mecca towards which Muslims turn when praying.) On the right side of the mihrab is the mimber ( a pulpit), built from seven kinds of marble. On Fridays and during religious holidays formal sermons are delivered from the mimber. On the left side of the mihrab are two ćurses (smaller pulpits); places from which general education lectures were delivered. The word ćurs bears a resemblance to the word ‘course’.

Opposite the mihrab, on the right side of the mosque door there is the mahfil (a gallery) raised on eight marble pillars and enclosed with wooden rails. This is where the muezzin (an employee of the mosque who delivers the call to prayer from the minaret and assist the imam in prayer) takes his place during the prayer. From the mahfila one enters the stairs within the wall, which lead towards the gallery below the dome.

On the left side of the mosque entrance is the maksura (an enclosure for guests who attend the ceremonies but do not take part in the prayer).

The central space of the mosque, on its left and right side, extends into tetims (lateral spaces) which have separate entrances. The tetims are also of a square shape (6.5 X 6.5 m). These spaces are connected to the central dome with arches and are covered by smaller domes 14 metres in height, which means that the relation between the lateral spaces and the central space of the mosque is 1 : 2. It is interesting to note that the main dome of the Beg’s Mosque, with its diameter and height, in relation to that of Aja Sofia in Istanbul is approximately 1 : 2.

Exceptional lighting of the mosque, with its 51 windows of which 12 lower ones are of rectangular shape, while the rest of the windows are crowned with a broken arch, gives an impression of a space quite larger than it actually is.

The mosque interior is characterised by beautiful stalactite decoration in the corners, underneath the domes and in the mihrab itself, and the ornaments and calligraphy on all the walls. The entire mosque interior is decorated with calligraphically written verses from the Qur’an. On the left side of the mosque entrance, hanging on the wall is a framed levha (a quotation from the Qur’an). This levha is over 120 years old and is written in gilded letters. 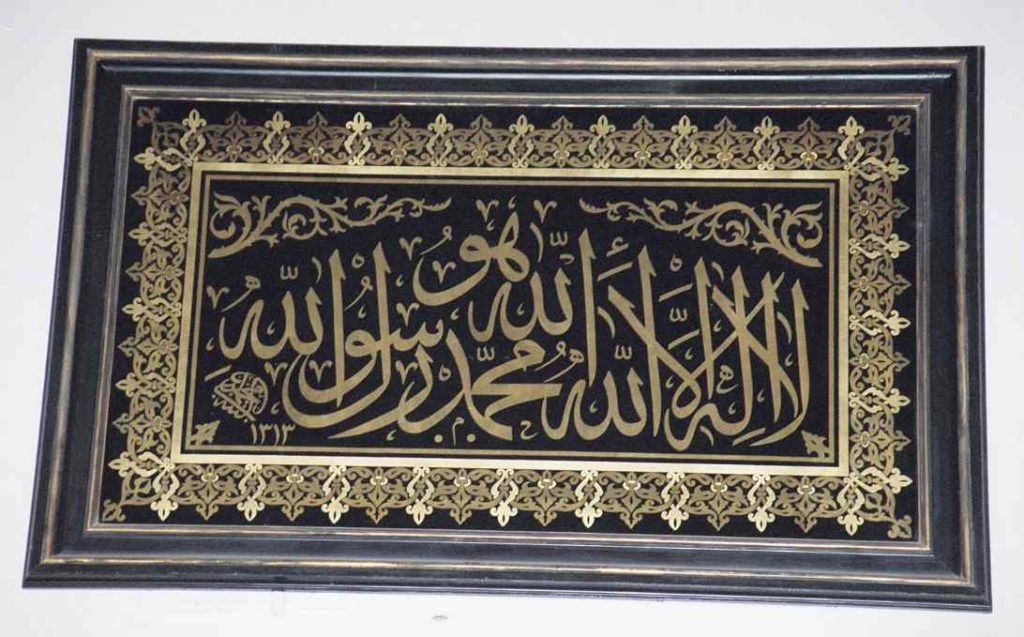 This particular levha is the credo of Islam and its translation is:

“There is no god but God, and Muhammad is His messenger”

The present-day decoration of the mosque interior is brand new and was done during 2001/02, realising the type and the colour of the ornament in accordance with the original style of oriental architecture. The earlier original decoration that was, due to the damage it suffered in a fire, restored in 1775, was once again heavily damaged in the fire of 1879. Following the last fire the restoration was performed by the Austro-Hungarian administration in 1886, but it wasn’t done in accordance with the earlier original oriental style.

During the shelling of the city of Sarajevo the Beg’s Mosque was hit by more than one hundred mortar and artillery shells, so that many people were amazed that following the restoration, regardless of the damage these walls had suffered, we managed to restore this mosque to its full splendour, which is a responsibility that had been handed down to us.

The mosque interior is covered with valuable rugs of which some are gifts of the heads of Islamic states who, during their stay in the capital city of Bosnia and Herzegovina, also visited this mosque. All the parts of the mosque interior make up a harmonious whole which, with the mosque exterior and perfectly balanced proportion of the minaret, which is 45 metres in height, testify to the virtuosity of the architect who has created a work of lasting artistic value.

Five times a day, from the mosque minaret a voice of the muezzin calls the believers to prayer, and this call has been repeated daily from the year 1530/31 till today. 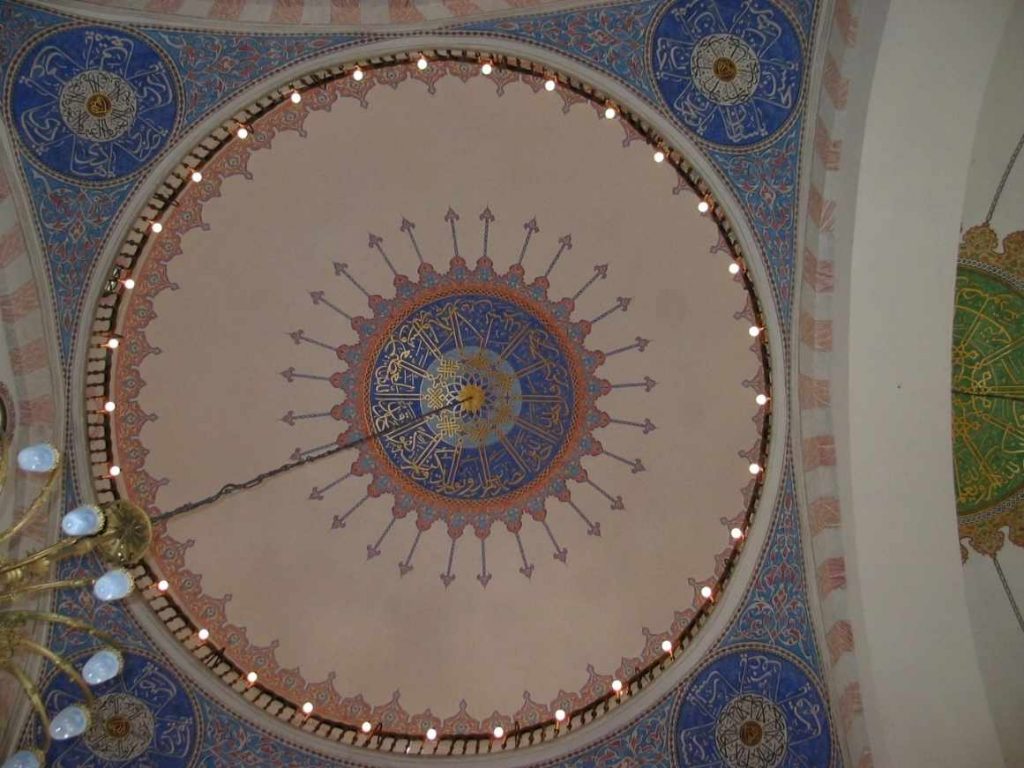 Inscription above the door of Ghazi Husrev-beg´s mosque